Although this pretty model isn’t Mary Magdalene, perhaps, she was  just as beautiful. it is suggested that the demons Jesus cast from here were the seven deadly sins, while the wages of sin is ultimately death, there is a list of seven and even a greater sin, Judas committed it.

But there really is not such list in the Word, He calls these abominations and things He hates, but here is the list given by Pope Gregory in the 6th century. Pride, envy, wrath, gluttony, lust, sloth, and greed. It is possible she had one or more, even all these. She was from Magdala, a wicked place. She is supposed to be a prostitute, perhaps, she was greedy and lustful, proud of her looks and how she could lure men. In the silent movie, King Of Kings, she is portrayed as being interested in Judas, but one look from Jesus melts the demons from her, it is a great scene.

There are six things that the LORD hates,
seven that are an abomination to Him:
haughty eyes, a lying tongue,
and hands that shed innocent blood,
a heart that devises wicked plans,
feet that make haste to run to evil,
a false witness who breathes out lies,
and one who sows discord among brothers. Proverbs 6:16-19

Haughty eyes, I guess we have all seen these. We know He hates lies. Hands that shed innocent blood, and that is not just abortion, it is just being ready to hurt someone, especially, God’s children.  People do sit around and devise wicked plans. Feet that make haste to  run to evil, people will surely do that. And I have heard  accusations and had experiences with those breathing lies. And we, no doubt,  have all run across those who sow discord in homes and churches.

Now, let’s talk about the Pope’s list, pride is what got the devil kicked out of heaven. It is easy to get into the I and me mode. It’s all about Him. Envy, we are not to wish we had what others do, He can bless us all, and the grass is not always greener. And why envy sinners?

Wrath? That is what is coming upon those left behind when Jesus takes the church before the Great Tribulation, He took our punishment on the cross, the full wrath of God, did you know that? It is true for believers. So, why want to hold onto theses sins, when He sets you free?

And gluttony, Lord knows I heard about that, any time I would overeat, but gluttony is over doing anything, and everything, not just seconds on occasion. I was a glutton for punishment in some ways, trying to help who I could not. Lust is not just what you think it is, and it is just that, it can be for anything, you can lust after other things not just fleshly.

Sloth make me think of those cuties hanging upside down, but is extreme laziness, I think even boredom, I have always been able to find something to do. And greed, well that would appear self explanatory. It is like children, ” It’s mine, if it’s yours, it’s mine, if you look at it, it’s mine. If you like it or want it, it’s mine. I’ll eat it even if I don’t like it because I don’t want you to have it, it’s mine. ” So much for greed, sounds funny but true enough.

So here we have the seven deadly sins and the list of abominations, do you see yourself in these? It’s easy enough to ask Jesus into your heart and if you are a believer to repent, it is another day, He will help you not to fall into temptations and not go astray, to resist these thoughts and sins, and the enemy.

For the wages of sin is death, but the free gift of God is eternal life in Christ Jesus our Lord. Romans 6:23 We don’t want any deadly sins, seven or however many. 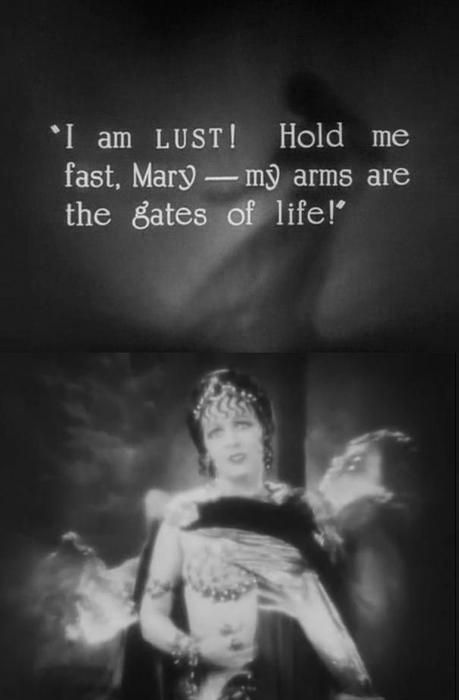 I tried to find a clip, even if you don’t have an appreciation for silent film, believers should enjoy it.

2 thoughts on “The Seven Deadly Sins”